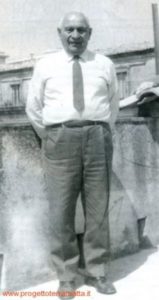 Vincenzo Rabito was born in 1899 into a near-destitute family in the small town of Chiaramonte Gulfi in south east Sicily. Most of his life was desperately hard: no school, manual labour in the countryside from childhood onwards to support his widowed mother and six siblings, war on Italy’s brutal north-east front, emigration to Africa, late marriage, but finally the achievement of a secure job as a road-mender in his home town and the chance – seized with all the determination and skill he could muster – to provide his three sons with better lives than he had had. His working life had been typical in many ways for members of his generation and social class – but the way he spent his retirement was definitely not.

Day by day between 1967 and 1970, experimenting with the typewriter left at home by his son Giovanni, the self-taught Vincenzo Rabito hammered out his life-story, blending standard Italian, Sicilian dialect and linguistic inventions in more than one thousand tightly-packed pages of brilliantly lively but very hard to read prose – every sentence was marked by unorthodox spelling, cramped spacing and eccentric punctuation. When Giovanni took the huge typescript away to see if he could find a publisher, his father then rewrote his life at even greater length, taking the story up to just a few days before his death in 1981.

No doubt Vincenzo Rabito’s friends would have been astonished to learn that he was writing his autobiography. But he himself would have been even more astonished to  discover how what he had written would be posthumously converted into a best-seller and a critically-acclaimed play and film. In 1999 Giovanni deposited his father’s text in the Archivio diaristico nazionale (National Diary Archive in Tuscany) which collects in their original form autobiographical works by non-professional writers. In 2000 it was awarded the Archive’s annual Prize. A drastically edited version, given the title Terra matta, was then prepared by Luca Ricci and Evelina Santangelo for publication in its most prestigious literary series by Einaudi in 2007. In 2009 Vincenzo Pirrotta adapted parts of that version for the stage in Catania. And in 2012 the film Terramatta; il Novecento italiano di Vincenzo Rabito analfabeta siciliano by Costanza Quatriglio and Chiara Ottaviano was presented at the Venice film festival where it won the first of several national and international prizes. In 2015 the descriptions of war along the Piave between 1915 and 1918 have been used in many commemorations of Italy’s entry into the First World War. An extraordinary afterlife for an exceptional work – as rewarding for us to read and to watch as it must have been for Vincenzo Rabito to create.