In March 2007 an autobiography by an unknown Sicilian, Vincenzo Rabito, with the title Terra matta was published posthumously by Einaudi in its Supercoralli series. Since that series is largely dedicated to the best national and international fiction, it might seem an unlikely location for an autobiography, especially one by a wholly unfamiliar author. Nonetheless, hailed immediately as a masterpiece by literary critics and historians, Terra matta rapidly became a publishing success, selling 15,000 hardcover copies in three months: there was even talk of submitting it for Italy’s most prestigious literary award, the Premio Strega. In 2008 a conference was organized to discuss the work and its author; and in the following year an adaptation was performed in the theatre and work started on the production of a version for the cinema. In 2012 the film, entitled Terramatta; Il Novecento italiano di Vincenzo Rabito analfabeta siciliano, was selected for presentation in the Giornate degli Autori section of the Venice Film Festival where it was received enthusiastically and awarded the first of several local, national and international prizes.1
Thus summarized, the success of Terra matta in both its written and cinematic forms might seem unusual but perhaps not so extraordinary as to warrant a special issue of the Journal of Modern Italian Studies. With promotion by supportive publishers, unknown authors do produce bestsellers out of the blue, and bestsellers are often enough converted for performance on stage or screen. But if we supply the details of the author and the actual text he produced, we can appreciate how remarkable it really was. Vincenzo Rabito, born in 1899 in the small town of Chiaramonte Gulfi in the Iblei mountains of south-east Sicily, had gone to work as a child to support his destitute widowed mother and siblings, had therefore never had even a day’s schooling and had had to teach himself to read and write. He took whatever casual rural work was available, was drafted to fight on the north-east front in the First World War, returned to Sicily to a series of mostly short-term jobs in different places, decided to join the Italians first in Libya and then in Italian East Africa between 1935 and 1939, and got married when back in Chiaramonte Gulfi the following year at the relatively late age of 40. In 1940 he volunteered to accompany his younger brother Paolo to work in the coal industry in Germany but returned to Sicily in 1943, where two years later he found a secure job as a road-mender. On retirement in 1967 he took over the typewriter he had given to the youngest of his three sons, Giovanni, and devoted three years to setting down the story of his life. The result was an uninterrupted flow of more than half a million words in a mix of semi-literate Italian, Sicilian dialect and idiosyncratic coinings, covering 1,027 pages without a single break by chapter, section or sentence but punctuated by semi-colons, commas, question marks or exclamation marks between almost every word. The only divisions were the physical distinctions between the typewritten and numbered sheets of paper. This huge and virtually unreadable typescript provided the raw material for the book eventually published as Terra matta and for the film based upon it. 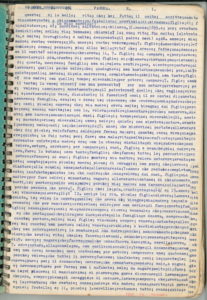 Despite its extraordinary success, the book has attracted rather little academic interest in Italy beyond attention from regional linguists and general appreciations – many by respected historians and literary critics – in newspapers and magazines. This absence of detailed scrutiny may be partly due to the general lack of interest in writing and reading autobiographies in Italy (Hainsworth 2007, 9–10). Perhaps, too, the cultural anomaly of an autobiography by an uneducated manual worker written with exceptional candour has tended to inhibit rather than invite analysis. Moreover, a difficult text by an unknown author, with no other writings and neither himself nor friends any longer alive to supply information, offers few of the usual materials for an extended critical appraisal. Most commentators have praised the extraordinary energy and narrative skill displayed in the book but have left the impression that, given the author’s apparently drastically limited cultural background, its appearance has to be treated as almost magical, captivating its readers by the very mystery of its inexplicability.2 They have taken its principal value to be documentary, suggesting that the story of Rabito’s life amounts to a counter-history of twentieth-century Italy or a depiction of Sicilian rural society or, less flatteringly, the self-portrait of a prototypical amoral familist. A similar emphasis appears in the reviews of the film which invariably revert to discussion of the characteristics of the book rather than on the ways it has been cinematically presented.3 For this issue of JMIS, however, we have set aside the assessment of its literary or historical value in favour of an analysis of the creatively collaborative transformation of the original typescript into a highly regarded object with substantial cultural value. Our concern is to examine how the work originally embodied in a sprawling and partly incomprehensible text was first made readable as a book and then watchable as a film, identifying the motivations, choices, constraints and decisions that have shaped its successive transformations within and between the two media. Analysing African oral and written culture, Karin Barber has reminded us that ‘texts are also things … social and historical facts whose forms, transformations and dispersal can be studied empirically’ (2007, 200). This perspective, central to the expanding discipline of book history, is the one that has organized our contributions: understanding how individuals and institutions have left their own creative imprints on the multiple forms in which the original work we now know as Terra matta has been embodied.